Sporting genius is a notion that vexes. Rarely does a tennis tournament, or a football match, or an athletics meeting take place in which one or more of the performers is not flattered with this weighty accolade - be it on account of consistency and determination, a pleasingly emotional or luckless back story or a singularly sublime moment of skill that induces a stream of superlatives from commentators and journalists alike. We use the word ‘genius’ so flippantly and with such astonishing regularity that it can do nothing but cheapen its impact and muddy the waters of what we know to be true. Let it be said and let it remain: genius, in all disciplines, is rare.

It is the tiny fraction of a percent of professional practitioners whose performance transcends the realm of their sport. Those once in a generation superstars who leave the game a better place then when they discovered it. The footballer who sees the pass that to others isn’t there, the snooker player whose equal dexterity with both hands baffles so much as it bowls over, the racehorse that wins all of its races by eight lengths, twelve lengths, fifteen... and without once breaking out of a canter. The tennis player who moves with the guile and grace of a ballet dancer, who constructs each point with a careful balance of engineering precision and artistic flair, whose single-handed backhand half-volley cross court is a master brush stroke on canvas...

For the best part of two decades Roger Federer, Rafael Nadal and Novak Djokovic have dominated men’s tennis, amassing almost sixty grand slam victories between them and occupying the year end ‘world number one’ position in sixteen of the last seventeen years. Now, as the sun begins to set on what will surely be considered the golden era in the sport, the question of which of the big three is ‘the greatest of all time’ (GOAT) is increasingly being asked.

Convincing arguments can be made for Djokovic; the super-fit Serb possesses a positive head to head record against both of his key rivals and an unmatched 324 weeks (and counting) at the top of the world rankings. His dominance of the sport in recent years has seen him approach - and in some cases surpass, the career achievements of the older contenders and his brilliance at the baseline makes him a formidable opponent on any surface. Nadal’s claims to GOAT status are pinned to his trademark aggression, never-say-die attitude and more than decade long dominance on the red clay of Paris. His win record against Federer is superior to Djokovic’s and he’s also the only one of the big three to have won Olympic singles gold. But despite some statistics seemingly favouring the hard-hitting, defence-minded players, it is Federer - the on court artist whose exquisite range of shots, deceptive speed of movement and seemingly effortless brilliance - who will undoubtedly live longest in the memory. Here’s why...

A Tally of Titles

Federer has won more titles than each of his rivals. His 103 tournament victories is bettered only by Jimmy Conners (who despite considerable achievements in the sport is not really in the reckoning for greatest of all time). Some will point to Federer having been on tour longer than the others - the Swiss turning professional in 1998, three years before Nadal and five before Djokovic - but given that there’s little between the trio in terms of titles per year, and with each of them approaching the twilight of their careers, I’d be willing to bet that this is a trophy haul unlikely to be beaten. 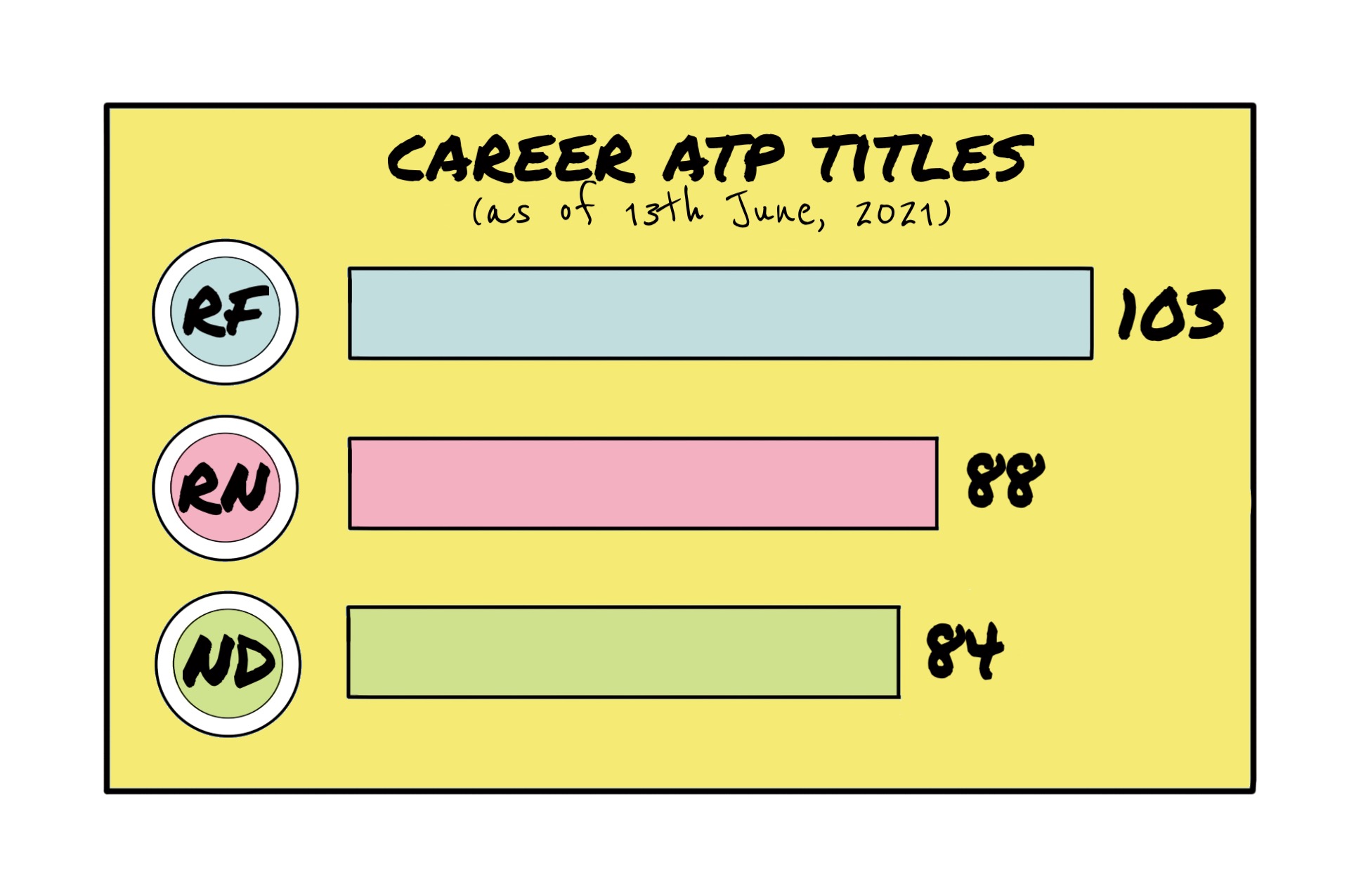 If we focus on Grand Slam victories alone the race appears much tighter; Federer and Nadal share the top spot with twenty titles a piece, whilst Djokovic - the youngest of the trio - lies one behind on nineteen. However, for Nadal in particular the data is skewed on account of his phenomenal record at Roland Garros. Subtract his thirteen French Open titles and his tally stands at just seven; do the same with Djokovic’s nine Australian Open victories and Federer’s eight Wimbledon crowns and you find the Swiss has a little more breathing space at the top. 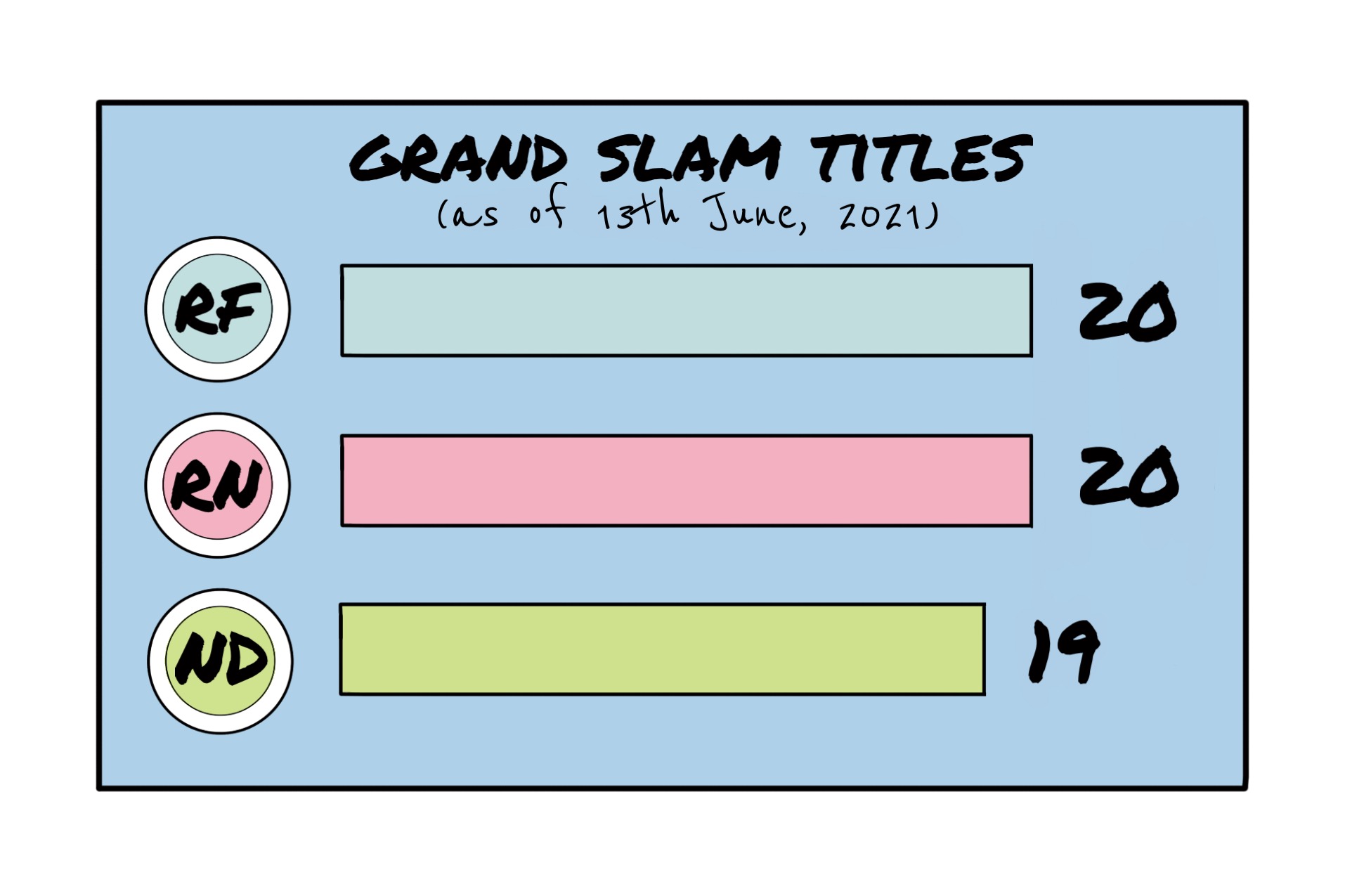 On Top of the World

Until recently Federer’s 310 weeks at the top of the world rankings seemed a fairly safe record. However, Djokovic’s continued success and the failure of the next generation to consistently shine on the biggest stage has seen the Serb surpass this seemingly insurmountable mark and start to put daylight between himself and the Swiss. That said, he still has some way to go though if he is to reach Federer’s record of 237 consecutive weeks on top of the world! 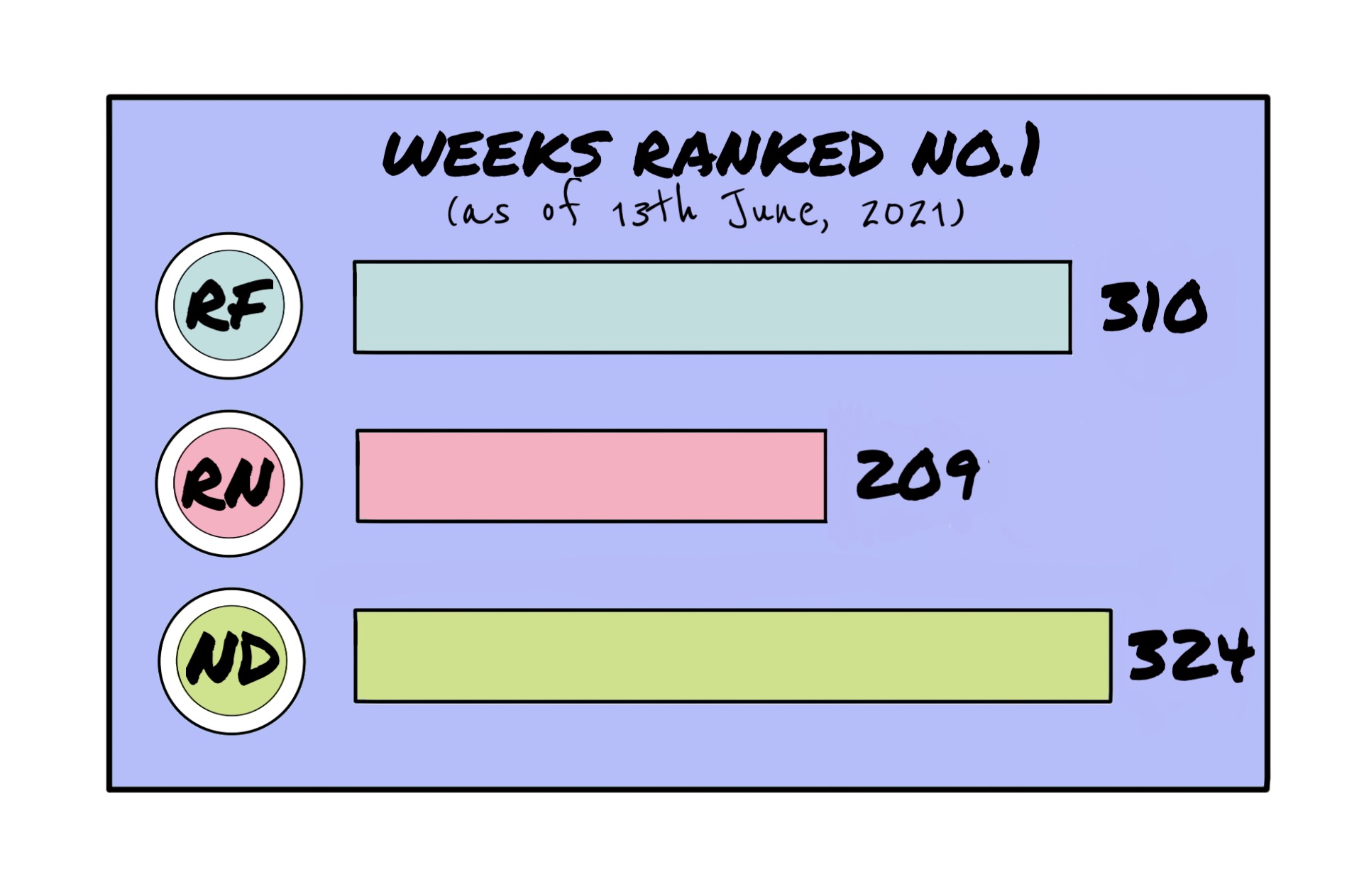 Die Hard fans of Nadal will point to his superior head to head record with Federer as proof of his GOAT status. The pair have met 40 times with the Spaniard victorious on 24 occasions. However on closer inspection of the statistics it becomes clear that this too is skewed by the playing surface; 14 of these victories have come on his favoured clay courts and it is in fact Federer who possesses a winning record on all other surfaces. 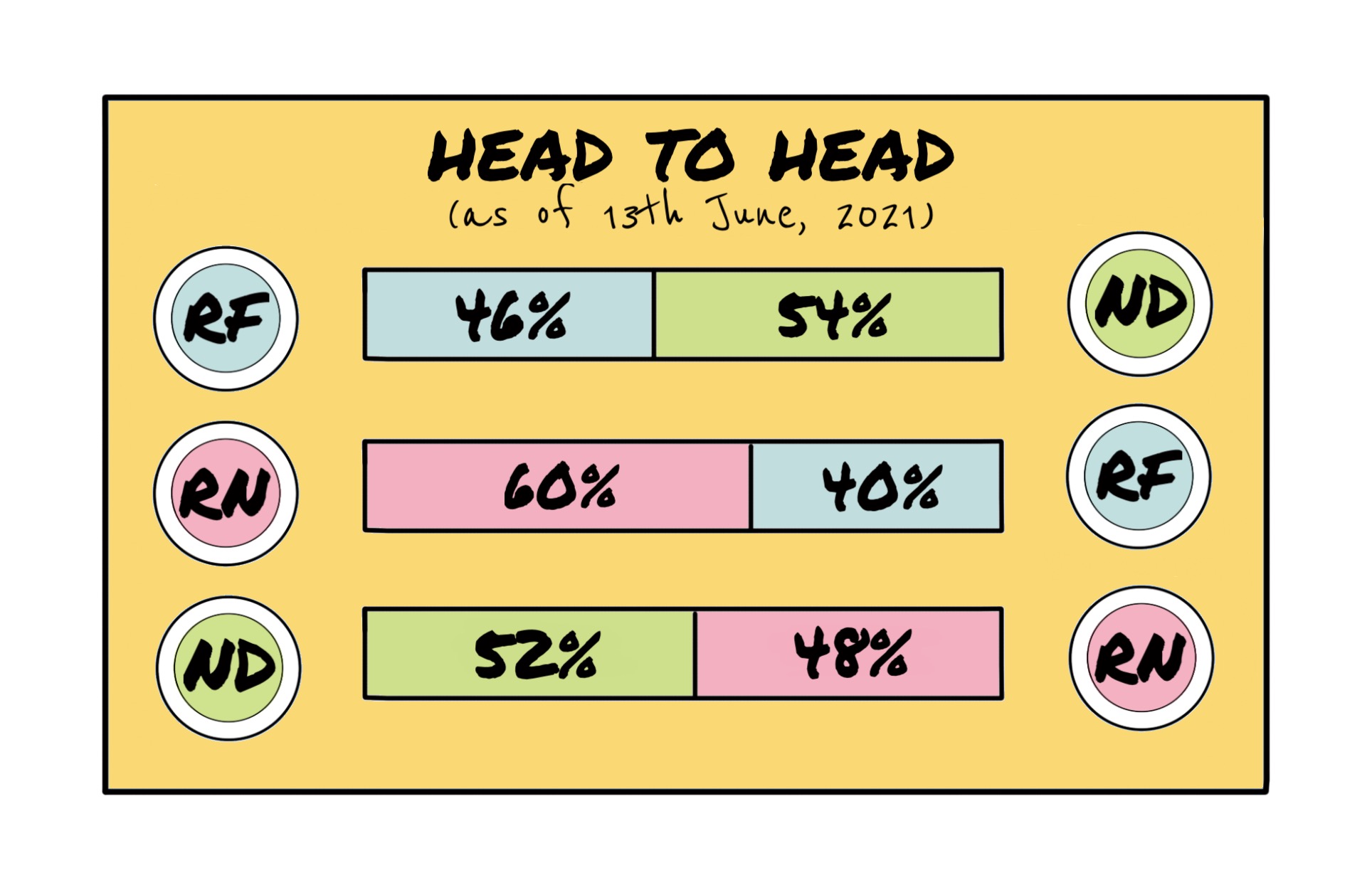 Numbers only tell half the story. Genius cannot always be quantified but it rarely goes unnoticed. Watching Federer in full flow, one cannot help but marvel at his magic. His control of the court, his calm facade under intense pressure, the bottomless bag of tricks upon which he calls in a crisis. When you settle down to watch one of his matches you can expect with startling regularity, to be stunned - flabbergasted, by his technical proficiency and the apparent impossibility of his shot selection; to be open mouthed in awe of his precision point serve, his elegant single-handed backhand, his enduring mental toughness; to be entertained to a tune that plays over and over in your mind long after the match is won. 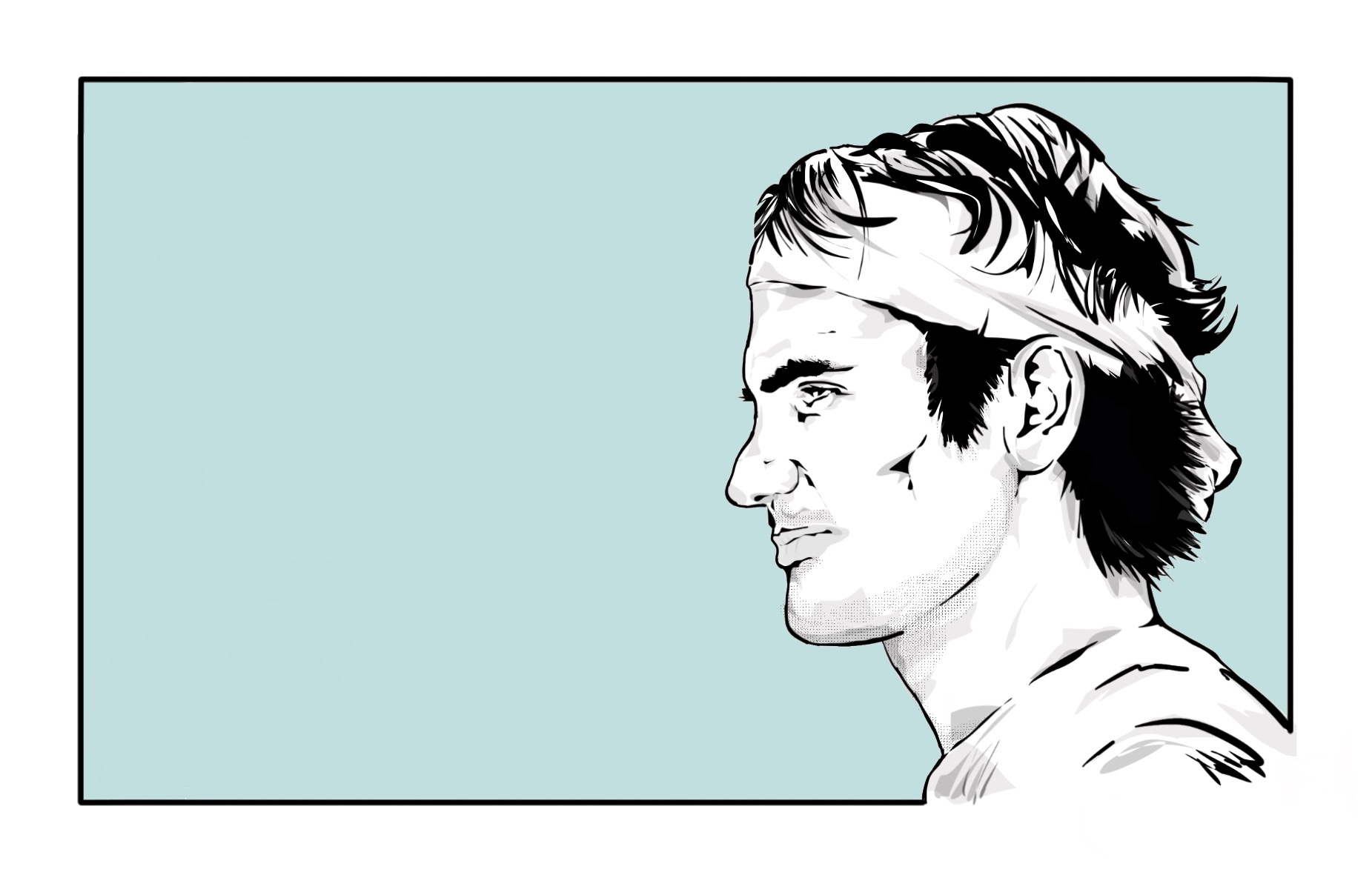 Nadal may reign on the clay; Djokovic - if he stays fit and healthy - may, in terms of statistics, surpass the career achievements of Federer. But neither the Spaniard nor the Serb possesses the undefinable quality of the Swiss maestro. It’s a blinding bright-light brilliance at which we can only stare and marvel. It’s a truth that is instantly distinguishable from the cacophony of counterfeit. It’s a beauty so blatant and yet so difficult to quantify. A magic that stirs a sense of wonder that we feel in the beating hearts of our chest, in the pulsing nerves of our brains, in the tender tips of our fingers. A level of mastery so unattainable and yet so easy to identify with. An ability to render the unimaginable as elementary; to defy impossible; to make the Riemann hypothesis appear like abecedarian mathematics.


Brainy Cow is an online quizzing platform designed by and for people who love quizzing.