As a self confessed numberphile, editing this blog post such that it doesn’t extend for pages was quite the challenge. There’s no escaping the fact that numbers are fundamental to our daily lives, enabling us to quantify what we see and experience, and affording us a common understanding of information that might otherwise not be possible. But not all numbers are created equal. And whilst some of the coolest numbers around are those whose values underpin important mathematical theorems such as the seemingly omnipresent pi, others are revered for the simple fact that they possess a multitude of interesting - if not necessarily useful - properties.

Below we detail the qualities of some of Brainy Cow’s favourite numbers, stating what it is that makes them special and why we think they warrant inclusion on this list. We know this list is not comprehensive, so if you think we’ve missed out a super special number, get in touch via Instagram or our contact form and let us know!

Small is beautiful... One is the smallest positive integer and by some definitions, the smallest in the infinite sequence of natural numbers. Neither composite nor prime, one is what mathematicians refer to as the multiplicative identity - that is, if you multiply (or divide) any number by one, you simply return the number that you started with. Given also that the number one raised to any power (exponent) returns one itself, it belongs to a select set of numbers that are both perfect squares and perfect cubes. After one, the next numbers that share this property are sixty-four, seven-hundred and twenty-nine and four-thousand and ninety-six.

Best known perhaps as the smallest and only even prime number, two is also the base of the binary number system used by computers to store data. It is also the only known number for which multiplying by itself gives the same answer as adding it to itself. Powers of two can be calculated by adding together the numbers in each row of Pascal’s triangle...

Lacking the profile of some of the other numbers on this list, twenty-eight hides an extensive array of illuminating properties under its bushel. As well as being the second perfect number, after six and before four-hundred and ninety-six, twenty-eight is the sum of the first seven positive integers, the first five prime numbers and the first five non-primes. It is also a happy number - that is a number that eventually reaches one when the squares of its digits are added together!

The Spanish artist Pablo Picasso once said ‘Everything you can imagine is real’ and so it seems fitting that the imaginary unit, i, is used in mathematics to extend the set of real numbers to include complex numbers - that is numbers that can be expressed in the form a + bi. As well as enabling us to find solutions to polynomials that do not intersect the x-axis, imaginary numbers have applications in wireless technologies and electronics (where j is used to denote the imaginary part, since i represents current). 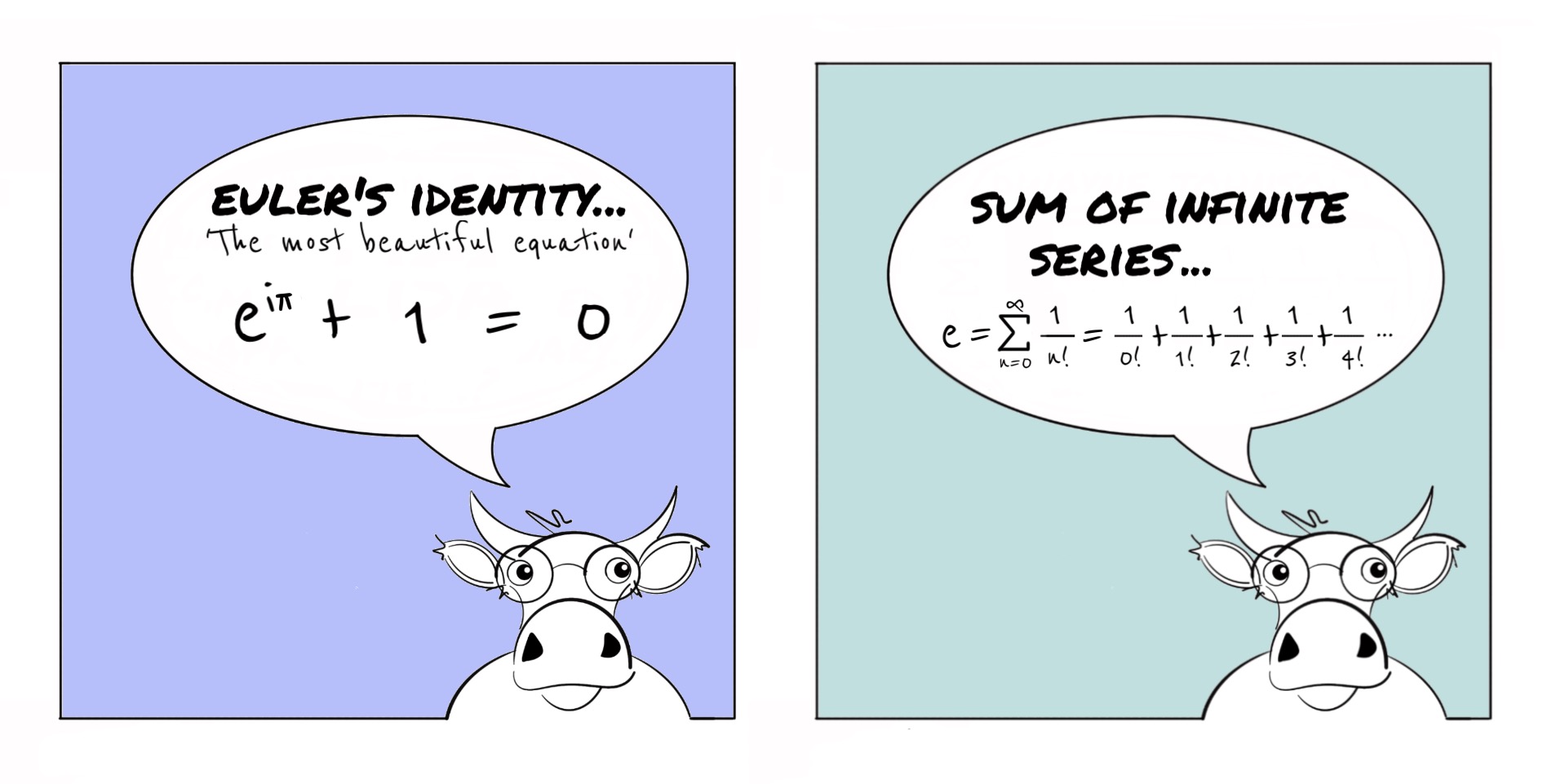 Named after the Swiss mathematician Leonard Euler, the irrational number e is the base of the natural logarithm and the sum of the infinite series 1/n!. It’s importance to mathematics can not be overestimated, having utility in multiple branches of the subject and featuring alongside i, pi, zero and one in Euler’s Identity - the equation often described as ‘the most beautiful in mathematics’. e^x is also the only function whose derivative is equal the function itself!

Pi might’ve been all the rage back in high school but big brother Tau is far cooler in Brainy Cow’s eyes. Simply the mathematical constant representing the ratio of a circle’s circumference to its radius, Tau is favoured by some mathematicians because it simplifies equations that traditionally use two pi, such as the aforementioned circumference of a circle and the Fourier Transforms. Approximating to 6.28, Tau day is celebrated each year on the 28th of June - a doubly important day in mathematics since it is the only date of the year on which both the day and the month are perfect numbers!

Technically two numbers rather than one, thirty-seven and seventy-three have been chosen because they are emirps - that is the anagrammatic name for prime numbers that remain prime when their digits are reversed. What’s so special about that I hear you say? Well, this particular pair are revered for the fact that not only are they mirrors of each other, but their respective positions in the list of primes are mirrors too - thirty-seven is the twelfth prime and seventy-three the twenty-first.


Brainy Cow is an online quizzing platform designed by and for people who love quizzing.